EAEA 2016 will be held on November 5-6, 2016 in Bandung, Indonesia. This event will be hosted by Universitas Padjadjaran with a support from the East Asian Economic Association (EAEA 2016). This year convention theme is Sustainable and Inclusive Development in Asia and the Global Economy. We expect to have around 250 participants from East Asia and beyond to present their research activities on related theme and topics.

CSD 2015 is a student-led conference in a collaboration between the War Studies Department and International Development Institute at King’s College London. This is our second year hosting the event, after a successful first conference on Organised Crime in Conflict Zones inMarch 2014. This year’s conference on Post-2015 Development Challenges in Conflict Zones took place this past March with over 20 expert speakers and more than 200 attendees. 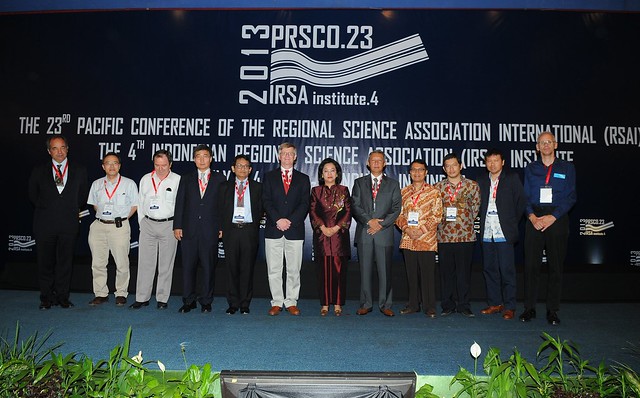 The 23rd Pacific Conference of Regional Science Association International (PRSCO 2013) and the 4th Indonesian Regional Science Association Institute (IRSA 2013) was held from 2-4 July 2014. This event hosted by Padjadjaran University and supported by PRSCO and IRSA. The conference is the biannual event of the Pacific section of the RSAI and will be a venue for regional scientists and researchers of various different disciplines from countries of the Pacific and beyond to share research findings and discuss current topics on the regional aspects of various global issues.

The 2nd Congress of the East Asian Association of the Environmental and Resource Economics (EAAERE) was held on 2nd to 4th February  2011 in Bandung, West Java, Indonesia. This congress was hosted by Faculty of Economics, Padjadjaran University. The congress programme will cover those important issues along with wider areas of environmental and resource economics. This congress was attended by more than 200 participants from East Asia and beyond, in their capacities as researchers, professionals, policy makers, as well as international organizations representatives engaged in various activities in the congress.

Forest Friends is a joint project between WWF-Indonesia and WWF-Germany where 6 selected finalist from Indonesia and Germany are mixed into three groups with one Indonesian and one Germany. Yangki was selected to works with Hanna Stanke from Germany to raise support where every single supporter, WWF will save 10 trees. In the end of this project, all of 6 finalist raised 6,378 fans/supporters and means in total we are going to plant 63,780 trees. To celebrate year 2011 as International Year of Forest, this tree plantation will be conducted in March/April 2011 in Tesso Nilo National Park, Riau, Sumatra, Indonesia. This project also in-line with WWF declaration to preserve Sumatran Tiger habitat. Tesso Nilo also known as the habitat for Sumatran Tiger.

Kandank Ilmu is an online platform to share courses materials for economics students. This was started in 2008 when Yangki was in charge in Research and Development Division, HIMA IESP FEB UNPAD. Kandank Ilmu also a national award winner of Danamon Young Leaders Award: Eco Campus Challenge 2009 for its initiative on reducing the paper consumption among students. This award was hosted by Bank Danamon.